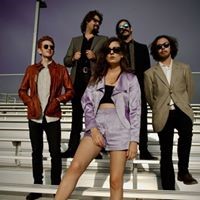 Meet five of your favorite Frankensteins. The Surrealistics is a five piece rock ensemble featuring front lady Stephanie Brown. The group's inception began in late September of 2016 as a duo between Brown and lead guitarist Ryan Amyot. The duo began co-writing tunes hoping for a sultry subdued sound, but eventually morphed into a rock n roll five-piece with key heavy riffs. Bringing in members Andrew Ware on drums, Hunter Stewart on bass, and Michael Stell on keys, their sound has been hastily evolving, and will continue to see rapid growth throughout 2019. They have been nominated for two SDMA's, performed at NAMM, and had a tune featured in Showtime's "Shameless." Brown has been performing in the greater San Diego area with several groups over the past few years, including psych rock band Ocelot that had the pleasure of opening up for the Budos Band at the Belly Up in 2016.

In addition to this, Brown had the pleasure of recording at the legendary Fame Studios in Muscle Shoals, AL in March of 2016 for the release of the Gregg Allman's final album, Southern Blood - working alongside talented producer Don Was and closely with Allman himself.

Brown sings in a raspy contralto, her lyrics often hauntingly melancholic with subtle existential themes. These tracks strive to bring back a 1950's-60's sound. So far, their debut tunes have been compared very broadly to artists including: The Dead Weather, Grace Slick, Concrete Blonde, Lana Del Rey, & Nirvana.